What is Dupuytren’s contracture?

This benign condition is usually hereditary and can manifest at any age, but usually does so in the second half of a person’s life. The condition is particularly common in the Northern hemisphere. However, the further one travels south the rarer it becomes. Scar tissue develops between the skin and the flexor tendons in the palm of the hand, starting as nodules and evolving into cord formation. This gradually causes contracture of the fingers. The cords are most common on the fourth and fifth radius of the hand and may extend to the fingers. Dupuytren’s contracture is not really painful but if the cord evolves it may be sensitive, especially in relation to the grip function. 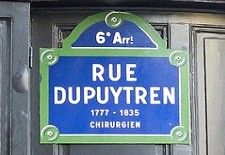 In rare cases, the same cord formation occurs on the sole of the foot (morbus Ledderhose) and the penis (La Peyronie) in men. How the course of the disease evolves remains unclear. A localised trauma can worsen the contractures. Currently no prevention exists to prevent the cord formation. There are a number of prognostic factors (diathesis) such as age, bilateral incidence, genetic load, localisation other than the hand, and so on, which jointly determine the evolution. In terms of treatment, preventive stretching, physiotherapy, medication or localised injections are of no use whatsoever. Treatment is proposed in the case of a 30° stretch deficiency. This is measured, for example, using the table top test in which the palm of the hand is placed flat on the table. If this is no longer possible we refer to it as a positive table test. The traditional open procedure involves removing the scar tissue (partial aponeurectomy) and correcting the stretch deficit. The zigzag (Bruner) incision is used in the process. We stress that the aponeurectomy technique in which the cord is interrupted percutaneously with a needle is only performed in very specific cases. Post-operatively a gutter-shaped cast is fitted and secondly a customised stretching device. These must be worn for four weeks. Quick recovery begins with physiotherapy. 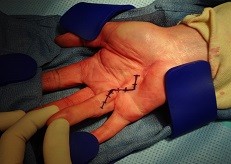 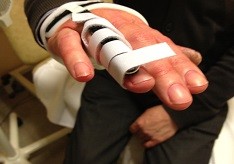